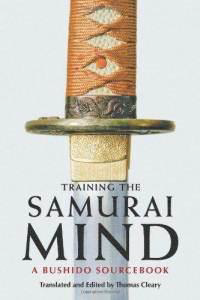 This is a collection of writings taken from various Japanese authors ranging from the fourteenth to the nineteenth centuries. Topics they cover range from psychology to foreign policy to religion to history to internal administration to, well, almost everything that is of potential interest to the military class of the time. Most of the authors have a strong Confucian bias with overt Taoist influences. All are quite nationalistic and, most are openly anti-Buddhist:

“In my years of pilgrimage, I never learned anything useful for practice from Buddhist teachers. . . . . they urge Buddhism on warriors, making them cowards, a regrettable phenomenon. . . . . . . For young samurai, listening to Buddhism is very wrong. . . . Elderly retirees may listen to Buddhism.” Yamamoto Tsunetomo

“Warriors should not believe in Buddhism. If you are influenced by Buddhist doctrines such as reincarnation, you’ll become weak-minded; your vigor will be drained.” Tomida Dairai

“Zen is a path studied by people who wither in mountain forests. . . . . . if you just look for the heart and mind without any purpose, that will become Zen study, or an aberrant technique. So you should not seek your subjective mind but rather seek the heart of the Way.” Saito Totsudo.

There is much room for disagreement between the authors, but the consistent theme throughout all the pieces is the nature of the mind set required to be a true warrior: inner courage over outer courage. Perhaps best and most poetically expressed by Kumazawa Banzan:

“A dragon is a creature with the ultimate positive energy, so much so that it can fly in the sky without wings. Yet it usually remains curled up in supremely still waters. This is how a man with a heart of true martial courage constantly cultivates himself.”

Overall this book is useful not so much for factual history but rather as quellenforschung, something often neglected in Western approaches to the Samurai; there is more value in the work as a whole, than there is in the individual chapters.