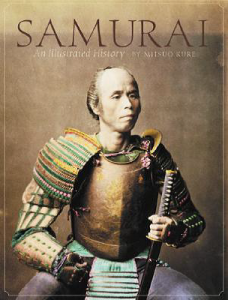 I like this book, it has lots of pictures and is semi unique in being a general book in English about the samurai that was not written by Stephen Turnball.

While not a specialist book by any means, it does include a lot of detailed information, not only on the history of the samurai class, but also on their culture and customs. It has all the, to be expected, pictures of armour and weapons, campaign maps, etcetera, but it also includes lots of weird trivia about such things as superstitions surrounding horse urination.

The illustrations are nicely done – many are photographs of modern Japanese doing reenactments.

What sets this book apart from most other general works is not only was it written by a Japanese author, but it makes no attempt to idealise the samurai, indeed it actively aims to demystify; presenting them as all too flawed human beings, rather than the more common stereotype preferred by television, Hollywood and many martial artists of perfect warriors with a Stoicism that would shame both Zeno and Marcus Aurelius:

“We should not confuse the romantic illusion with reality; the medieval samurai was superstitious, irrational, and held human life cheap.” (p.129)

As a first introduction to Japanese military history and the life and culture of the samurai, this is well worth the read.