We did not make it to Japan this year, unfortunately, so as part of my reminiscing here is an article I wrote on surviving there as a vegan, with thanks to Tanwyn Sensei for providing the photos.

If you do any basic research on finding vegan food in Japan you will invariably be told that even though it is becoming more accessible, it is still very difficult.

Whilst the first part of the statement is true in terms of more vegan only establishments opening up in the larger cities like Tokyo and Kyoto, (you can even find vegan bento boxes at Tokyo station), the second part is more apparent than real.

On my first few trips I accepted the difficulty as a matter of course and used my Japanese holidays as a weight loss regime.

The truth is, however, that Japan has plenty of vegan food to offer if you know how to look and make a little effort. Indeed, now days I come back having put weight on.

The cause of the discrepancy in perception is that the Japanese do not regard the meals as ‘vegan’, as such. They are just traditional Japanese meal options.

Fish in dashi does remain a problem, but even that is not insurmountable. If you memorise some simple phrases such as:

or even the more general:

It is always worth asking about the dashi separately, as the fish stock in this is so generic it is often forgotten by the serving staff.

Here are some of the ways we have eaten well in Japan as vegans.

The simplest way is to buy familiar foods from either a konbini, or a supermarket and make up your own salads, etcetera. This is a good way to have pre prepared lunches for those long travel days. But is also perhaps, the least satisfying way of finding food, it being far too close to what you would do at home.

Safe Japanese foods like inari zushi are also readily found in such places, for a quick, if not necessarily nutritious, snack. (Certainly my youngest’s favourite konbini food). There are also a variety of vegan onigiri to be had this way, but if you cannot read the ingredients, you could be in for a nasty surprise, so choose wisely.

Small lunch time dango shops, or roadside vendors, provide a good walking snack or sit down lunch. One tiny place we found, run by an old couple, also served some of the best home made tofu you could ever wish for.

Minshuku regularly offer meals for an added cost to the accommodation. We usually organise, at least, breakfast this way. A little bit of basic communication ensures it is vegan and we start each day well fed with a traditional Japanese breakfast of rice, vegetables, pickles and soup.

One of the minshuku breakfasts

In more remote locations with a lack of eating options, the same can be done for the other meals. One place we stayed at, fed us so well for breakfast and dinner, that I did not bother eating lunches. This is also an excellent way to sample local delicacies. I have very fond memories of mountain vegetable pickles. 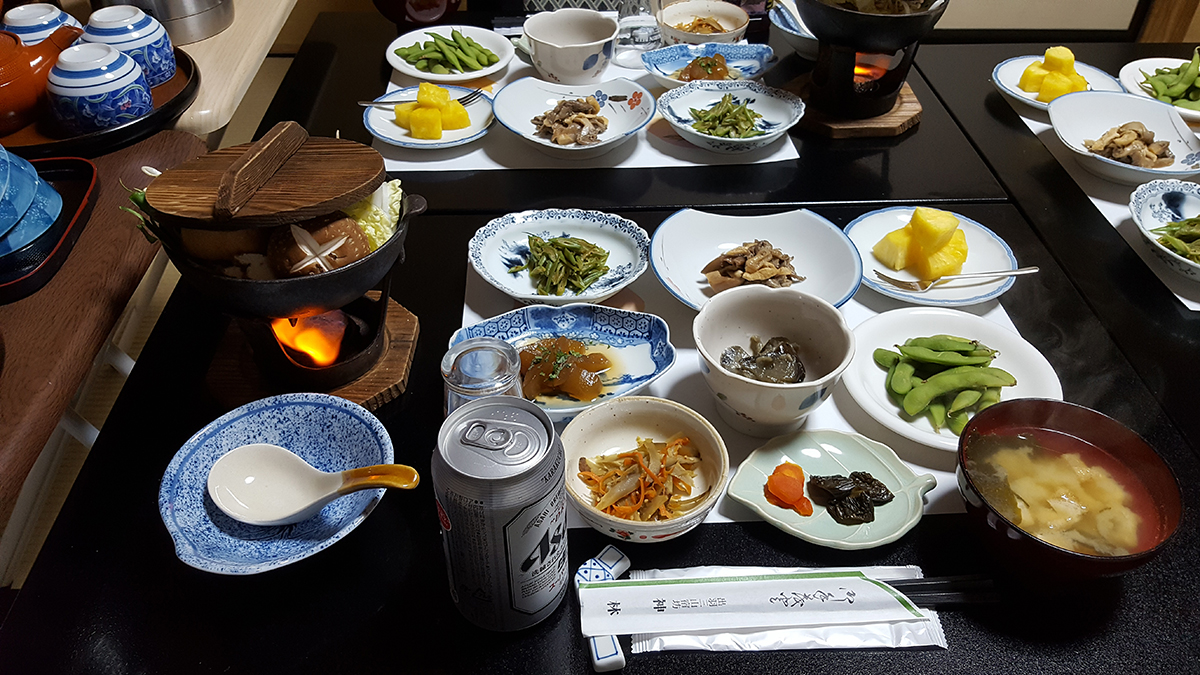 Dinner at the minshuku with complementary beer

In the evenings a good place to find vegan food is any of the Family pubs. There are a number of these chain store franchises across Japan and they are an excellent way to wind down after a long day of climbing stairs. You have a booth to yourself and the menus have pictures of all the meals. They usually have one or two vegan mains, such as soba noodles and a good variety of side dishes. Order one of each and you have a vegan feast to share. Our favourite Ne Ne Ya, has a sprout salad dressed with truffle oil that we have never been able to resist. 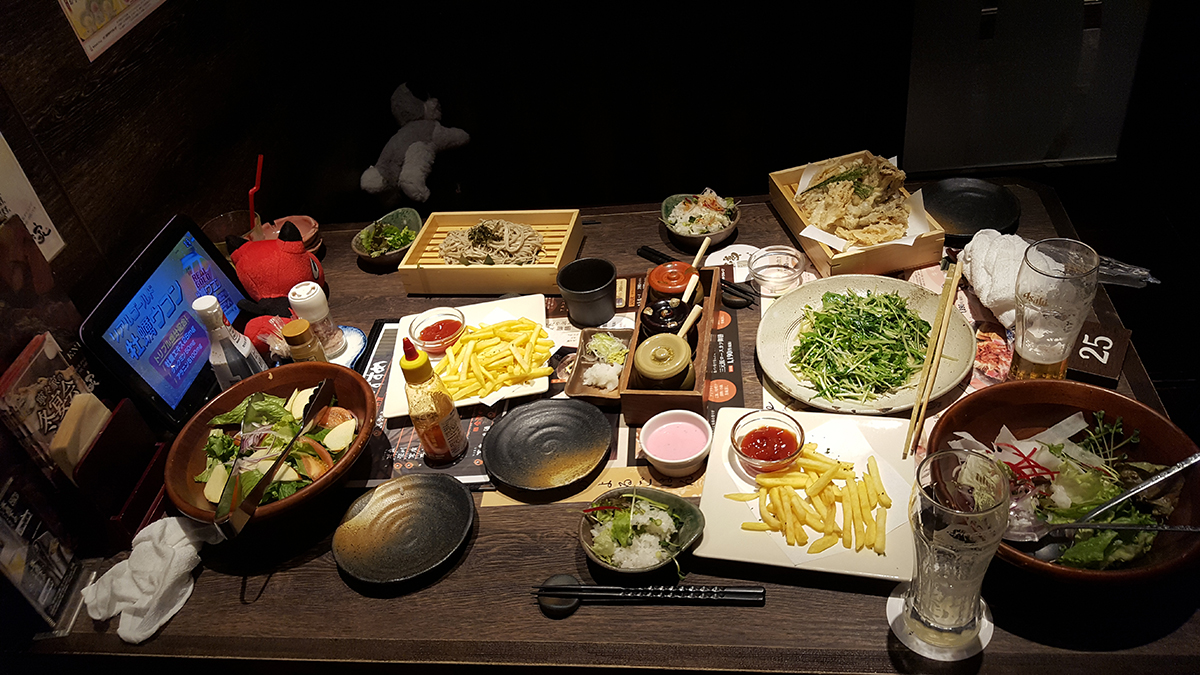 It is also not too difficult to have a more up market restaurant vegan meal without the expense of a Kyoto monastery shojin ryori restaurant. By all means, do not neglect such an experience if you have the money and happen to be in Kyoto. It will be one of the most exquisitely delightful dining experiences of your life. We have managed equally sublime experiences in small towns.

By arranging with the restaurant in advance that we wanted a vegan meal, shojin ryori style, they were quite happy to create a banquet for us, not available on their standard menu. The first time we did this, having very little in the way of language skills, we organised it through the information office at the local train station, where one of the staff spoke some English. The second time, with only marginally better skills, we did it ourselves, by just turning up an hour or so before we wanted to eat, explained what we wanted, when and for how many. They asked what our budget was and all was sorted. We came back to a multi course feast of dishes of unimaginable elegance and indescribable tastes, each plate surpassing the one before.

A fig dish that we are still talking about years later

All this, including sake came to less than 2000 yen a person. We could not eat it all, leading to that awkward moment of asking for a take away container, without appearing to suggest the chef come home with me for the evening. Much room for improvement in my Japanese language.

With not too much effort it is quite easy to eat well and vegan in Japan. And bear in mind our language skills were rudimentary at best. I do not recommend those cards you can find on various web sites that you can print out to take with you, stating in Japanese that you can not eat any of the foods listed on the card. We tried them one year, and every place we presented them to told us there was nothing they could serve us. There no doubt was much we could eat, but they were not going to take the risk. It is better to learn a few key phrases and try to communicate in person.

Much of Japanese food already is vegan, they simply do not define it in that manner. Making the effort to discover this can be one of the most rewarding culinary experiences of your life.