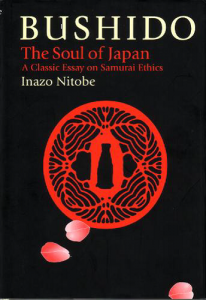 This book was first published in 1900 and was written in English rather than Japanese.

Its purpose was to inform the West as to the ‘true’ nature of the Japanese people at a time when Japanese society itself was undergoing massive changes and industrialisation.

As an historical document alone, it is worth reading.

As a literary work, it is not without its flaws.

If one was to sum them up in a single sentence, it would be: “tries too hard”.

Nitobe idealises the samurai ideal, that is probably to be expected, but his style is one of literary name dropping. Virtually every page includes a reference or comparison to some Western notable, philosopher, religious figure or academic. Everyone from Mohammed to Dante to Zeno. One soon begins to wonder how much of this is necessary; the impression is that he has a strong compulsion to constantly demonstrate his own European academic credentials to his audience and this may well be so, but it does become a little irritating:

‘Since Bushido, like Aristotle and some modern sociologists conceived the state as antedating the individual – the latter being born into the former as part and parcel thereof, – he must live and die for it or for the incumbent of its legitimate authority. Readers of Crito will remember the argument with which Socrates represents the laws of the city as pleading with him on the subject of his escape. Among others he makes them (the laws or the state) say: “Since you were begotten and nutured and educated under us, dare you once to say you are not our offspring and servant, you and your fathers before you?” These are words which do not impress us as any thing extraordinary; for the same thing has long been on the lips of Bushido’

It is an interesting book to read, but not necessarily an easy or enjoyable one.