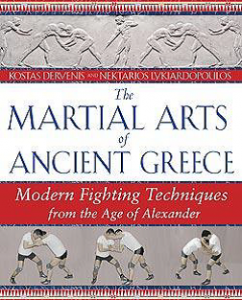 Given my academic background, how could I resist reading this book?

The book aims to rediscover the martial arts of the ancient Mediterranean and analyse those techniques in the light of similar contemporary applications, it finishes off with an examination of the spiritual foundations of those ancient forms.

The illustrations throughout the work of ancient weapons and combat are quite interesting; the rest of the book never rises above disappointing.

At its heart, it is based on flawed methodology. The authors simply are not historians, though they try to be. Had they been my students, I would have failed them for handing in such, assumption based speculation.

Their use of ancient sources is rarely referenced and, at best, uncritically naive. When they make use of modern sources to back up their claims, it is usually only to one source and a very general one at that. The authors clearly came to their subject with strongly held, preformed ideas and opinions and then set about to prove them, uncritically picking and choosing amongst the evidence only those things that gave credence to their claims and arbitrarily dismissing those that did not.

One example should suffice to illustrate their approach:

“Most researchers in the West maintain today that Bodhidharma was not a real person, and that this name was a creation of popular legend, given to various Buddhist missionaries who had crossed the borders of China. The same type of skeptics, however, maintain that Homer was not a real person either, and that his epic sagas are simply a collective synthesis of older works of lesser poets.

This could have been a good book, instead it is riddled with the authors’ own biased interpretations of uncritically presented ‘facts’; and these assumptions are then given as proven truths on which to base further speculations.