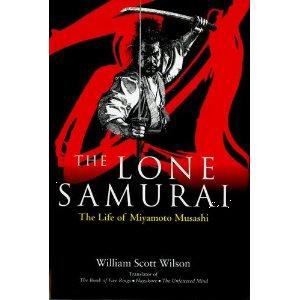 “What Musashi established with the sixty-one years of his life was a legend and an ideal for the Japanese people for which there is no equivalent in Western culture.”

Much has been written about Miyamoto Musashi, he is perhaps the most famous samurai from Japanese history known to Westerners.

This short book is one of the best I have read detailing his life.

The author has gone well beyond the Five Rings and examines in detail all that can be gleaned about Musashi from the extant records.

As well as the usual biographical information and sword duels, the work looks at his art and calligraphy, his evolving philosophy and spirituality, his influence and influences. It even has a Musashi filmography; the first dates to 1908 – Miyamoto Musashi’s Subjugation of the Lustful Old Man, by Yoshizawa Shoten, done with puppets.

Wilson’s admiration for Musashi is clearly evident throughout, however, this does not prevent him from putting in those negative stories that other works on the subject tend to ignore. Indeed, most modern works on Musashi take his later title of kensei to be a literal truth, not so The Lone Samurai.

If all you know about the historical Musashi is what you read in the preface to your copy of the Book of Five Rings, or you think that everything you read in Yoshikawa Eiji’s novel is real, then this is an excellent book for you.

“In the end we cannot fully know Musashi’s character. . . . . If we need a final image of him, however, we might see him . . . . . . seated informally on the tatami in a ten-foot-square tea room in Kumamoto Castle, speaking respectfully but openly in his low, quiet voice with the daimyo Hosokawa Tadaoki and the young Zen priest Shunzan. It is a crisp autumn afternoon, and of the three men, only Musashi can identify the bird that sings in the garden outside.”

I leave the final word to Musashi and his twenty-one maxims, for as Wilson points out, they “read like a bare-bones outline of Musashi’s life, both historical and spiritual”:

Do not turn your back on the various Ways of this world.

Do not scheme for physical pleasure.

Do not intend to rely on anything.

Do not regret things about your own personal life.

Do not envy another’s good or evil.

Do not lament parting on any road whatsoever.

Do not complain or feel bitterly about yourself or others.

Have no heart for approaching the path of love.

Do not have preferences.

Do not harbor hopes for your own personal home.

Do not have a liking for delicious food for yourself.

Do not carry antiques handed down from generation to generation.

Do not fast so that it affects you physically.

While it’s different with military equipment, do not be fond of material things.

While on the Way, do not begrudge death.

Do not be intent on possessing valuables or a fief in old age.

Respect the gods and Buddhas, but do not depend on them.

Never depart from the Way of the Martial Arts.