The ryokan was able to provide adequate breakfast for four of us.

I saw a falafel shop on the way to the train station; this glimpse counted for my meal.

Wife discovered yesterday, thanks to some helpful English speaking railway officials that our IC cards would get us to Aizu, so she loaded them up with enough yen to do so and we boarded our first train.

The rain is nice.

On the second train we were informed by the non English speaking railway staff and also via phone by other English speaking rail staff, that no, our IC cards would not get us to Aizu. So cash had to be paid to cover this leg of the journey and somehow we have to try and recover the money off the cards back in Tokyo. Wife was not happy about this and having expressed her feelings, perhaps less than adequately for her, she is now known as a person of interest to all railway employees and security personnel in the Kanto and Tohoku districts. 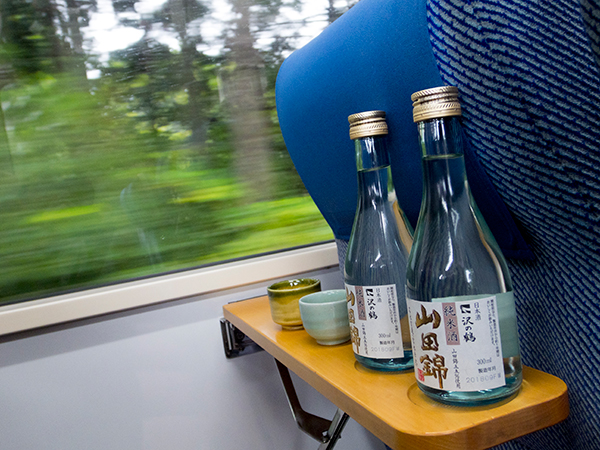 Dropped our bags at the minshuku; confirmed the veganess of our breakfasts and headed back into town for a relaxed meal at Ne Ne Ya, one of our favourite eating places.

Student four was waiting for us when we returned. She had been exiled from the School many years earlier for once calling Archimedes, “the heel guy”, in class and now lives in Japan studying classical history in her spare time. Catch up chats and saké before heading to bed.

No one other than myself has expressed anything besides confusion and horror at my Plan B for staying in Japan:

I have the minshuku family adopt me as their half human, half tengu hybrid offspring and they keep me here with room and board, but because of the shame, I never have to interact with others.

Is a good plan.

Mum had a talk with the handler to show us where carriage 1 is. He led us, we said thank you, (in Japanese). We boarded the train and sat down. I played slitherio. After that we hopped off and waited . . . until another train that we are supposed to catch FINALLY arrives and we boarded and I played slitherio, but my phone went flat.

I was so bored after that.

Had a wolf nap, then hopped off the train.

When we arrived at the train station I played with Akabe, then caught a taxi to the minshuku.

Showered and bathed after dinner then went to bed.

Sliced in rounds and quartered

Gone before I could grasp it

A fleeting thought of a pickle

The spice was overpowering, but there was a satisfying crack when I bit down

Disappointing that this was the last pickle for the day