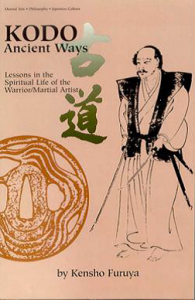 This book is a collection of articles originally published in the magazine, Martial Arts Training, between 1988 and 1995.

The author is both an aikido practitioner (Aiki Kai), and a Zen Buddhist priest and his biases are apparent and clearly stated.

His aim, is to provide insight into how modern martial arts practitioners can still benefit from ‘ancient’ traditions and wisdom.

Given its original source, the work is, expectably, an easy read, being full of very short chapters with lots of the usual pictures.

It is full of homespun martial arts wisdom and traditional sayings, all of which range from the obvious and banal to the genuinely insightful and inspiring; which is which probably depends on your mood at the time.

While I personally find the constant self referencing in the book irritating, this is actually a very nice work and one I would recommend to anyone in the early stages of their martial arts training who is looking for some entertaining access to the non physical aspects of their art. I say ‘early stages’, not because the material is only suitable for beginners, but rather because, if you have been around long enough, you have probably come across most of the book in other guises already.